How to Get Him to Commit: 11 Powerful Secrets 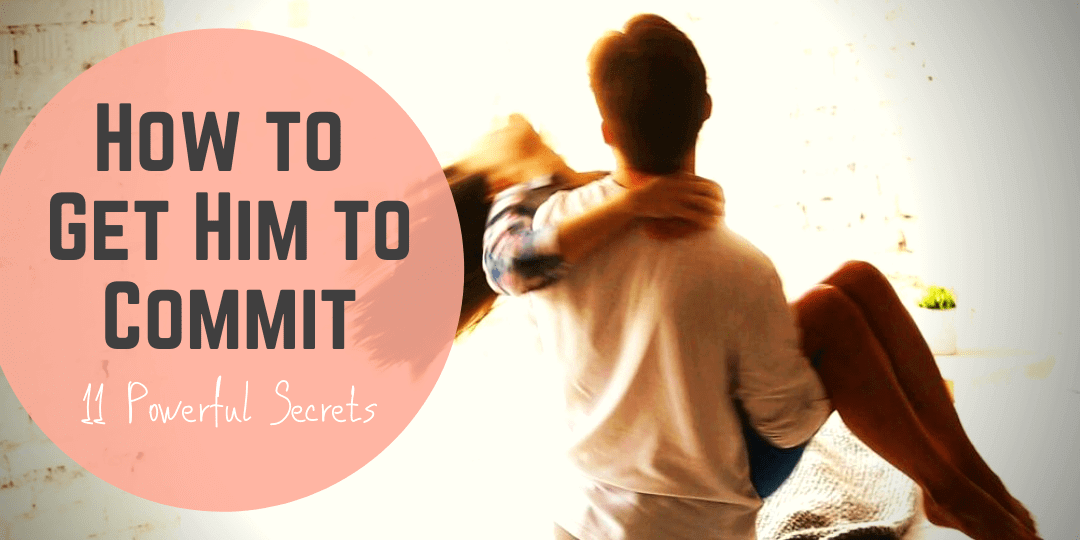 There are distinct differences between a woman that a man falls truly in love with and a woman that he keeps around until THE ONE comes along. If you want to be the one that he commits to for life, there are specific tips that you need to know.

The truth is that a High Quality, High-Value man may be attracted to many women, but he will only fall head over heels in love with ONE.

The one that he will fall for is the luscious, feminine High-Value woman. She is the one that has what other women don’t. More importantly, she is the woman planted deep inside of YOU, waiting to break out and flourish. So let’s dive in and find out how to get him to commit and become his one and only.

1. He wants a Wonder Woman

A Wonder Woman, on the other hand, is a woman who he wants to love, cherish, and commit to. She is a woman that becomes irreplaceable to a man.  He is so enamored by her that he wants to own her completely – her mind, body and spirit. She is the feminine goddess that he will commit everything to.

Being truly loved and made to feel like a Wonder Woman is a billion times more exhilarating and rewarding than getting cheap, momentary attention from a man.

What makes a woman a Wonder Woman is her ability to understand men. Understanding men is all about anticipating what they want from a woman, what makes them feel good and what makes them want to reciprocate. That is how to get him to commit.

The sad truth is that most women are completely oblivious to the impression that they give off to a man. They do things like throw their feet up on the couch, swear in front of him, try to control his behaviour, and act like a buddy instead of a lady (to name just a few ;)). You must remember that your behaviour will directly affect how a man treats you – and you have the power to change this in an instant.

This is why it is important to understand that if you want a man to treat you like a goddess and put you on a pedestal then you have to be aware of the impression that you are giving off to men. That includes how you dress, how you move, what you say, and how you behave.

2. He needs to feel inspired

A High-Quality, High-Value man knows how to enjoy his life and get what he wants without a woman by his side.

This is why he needs to be INSPIRED by a woman in order for him to commit and it comes down to how he feels.

He wants to feel that you add so much to his life that he can’t imagine it without you. He wants to see that you can add to his life with your presence. This is all about your energy, your vibe, your sensuality, your playfulness, and your emotions. Men need to feel GOOD when they are around you which makes them want to be around you more. See the post on how to be the most attractive, feminine goddess here.

3. He wants an emotionally balanced woman

That is why it is important that he feels positive emotions around you as much as possible, rather than negative ones.

Learn to deal with negative emotions such as fear, insecurity, and boredom on your own time and save your best self for him. This way, you can show up as an emotionally balanced, loving, attractive woman that he wants to be around all the time.

The worst thing for a man is to feel stressed, controlled, and blamed in a relationship. If he gets a glimpse of insecure, anxious vibes often enough, he may feel that you are not commitment material. Of course, we all feel that way from time to time, but the more easy-going you can be, the less likely he will have doubts about committing to you.

4. He wants a woman with integrity

A high-value man wants a real woman who accepts and loves herself and her own emotions.

This means that she accepts herself and does not pretend that everything is fine when it really isn’t.

She can share with him when she is feeling sad, happy, or frustrated because she is okay with being herself. She does not judge herself for her emotions and she does not fake it or try to put on a “happy” face. This is what makes her real. She tells her man exactly what she wants from him, rather than hoping that he guesses.

A man will see strength and integrity in a woman who can be real. This is because she does not tolerate poor treatment from men or anyone who criticizes her or puts her down. She stands up for herself because she values and respects herself. That is what makes her naturally show up as a high-value woman and what makes a man attracted to her.

Remember, lovely, the way you treat yourself is the way that men will treat you. Learn to love, adore, and enjoy yourself.

A Low Value, Low-Quality man will settle for almost any type of woman. He will see a woman who is physically attractive and that will be enough for him. He is not very hard to impress. He is not interesting to a strong, High-Value woman because her standards are much higher than his.

A High-Quality man, on the other hand, is the man that you actually want and deserve to be with. He is the man with high standards who is not easily wooed by a short skirt who sends a giggle his way. He wants a woman, not a girl. Sure, he may admire her physical beauty, but his attention on her will not last very long if she does not have the qualities of a strong woman. Some of those qualities include a woman who is caring/unselfish, vulnerable, flexible, and understands men.

6. He wants a woman he can lead

A High-Value, High-Quality man wants a woman who allows him to take her places without trying to steer all the time.He wants to be able to make decisions and lead his woman because it makes him feel like a courageous, strong man. Chances are that as a woman, you will also be happiest with a man who is a leader rather than a follower.

A woman who tries to control, lead, and be right is unattractive to high-value men and they will usually not commit to this type of woman. Read this article to understand the difference between High-Value masculine men and Low-Value men.

I know it can be super tough but if you can learn to give up some control with men, you will inspire them to be more masculine for you in return.

7. An energetically balanced woman is the most attractive woman

Ultimately, a man wants a woman who is energetically balanced. What does this mean? It means that she is mostly feminine in her energy but she also has some masculine energy to balance it out. The feminine side of her is accepting, fun, vulnerable, emotional, and caring. The masculine side of her is proactive, independent, leading, and controlling.

When a woman has too much feminine energy, she is erratic, overly emotional, approval-seeking, and has difficulty finding her own purpose in life. Add a dash of masculine energy and she is now proactive and knows how to get what she wants. This is what I mean when I say she is energetically balanced. The right balance of masculine-feminine energy is the most important ingredient in a relationship.

8. A man loves a woman who loves herself

Once you learn to fully accept yourself, you will much more easily and naturally attract amazing supermen into your life. They will gravitate towards you without you even having to do anything. This is because accepting yourself shows a man that you are a High Value woman.

Because when you are being yourself, you are not worrying about what others think.

That is when the most confident, relaxed and attractive side of you will shine. Being authentic and comfortable in your own skin is super attractive to men. They see that you are not seeking their approval and you are not willing to compromise yourself and your boundaries in order to please a man. This is the type of confidence that will magnetically draw men to you.

9. A man wants a woman who is non-judgmental

Being open and authentic around a man will inspire him to be the same with you. He will be more likely to share things with you.

The important thing is that you respond in the right way when he opens up – this is what can make or break communication with a man.

Whenever he opens up to you and shares something meaningful or difficult for him to share, you must accept him fully. Do not judge him, belittle him, laugh at him, or make him feel wrong. Accept him without judgment and he will be amazed by you.

10. Here is what makes him place you in the DO NOT COMMIT category

(These are just a few basic tips. For more on understanding men, grab the free eBook Secrets of a High-Value Woman here.

A High Value man wants a woman to have specific qualities that differentiate her from ALL OTHER WOMEN. She has to be special to him in order for him to want a relationship with her.

He has to see you as unique and worth committing to which has everything to do with how VALUABLE he perceives you to be. We place more value on things that are scarce because they are rare and not easily attainable.

The same thing works when it comes to the dating pool. You must show up as a High-Value woman who is not “easy” to get. This means that you are a challenge to him (and not because you play games). It is because you have integrity and set high standards for yourself and others.

You are not easily dazzled by any lame guy who gives you a bit of attention.

You are not a woman that just any man can win over.

Your man will see that you are a High Quality woman when you are SELECTIVE with who you give your attention to. This means that you show your man “special” treatment and be warm, engaging and flirtatious with him, but not with other men.

Remember lovely, a High Quality, High-Value man will not commit to just anyone, he wants to commit to a Wonder Woman, a feminine goddess who he sees as special and unique.

That is why you have a choice to make.

Which of these women would you rather be? The “just another woman” or the “only feminine goddess in his life”? If you want to be the one that he cherishes and cannot live without, then you need to show him that you are a unique feminine goddess that has the qualities that most other women do not. This is what will set you apart and make a man fall head over heels in love with you and crave to commit to you. If you want to be in the top 1% of women that truly understands men, get instant access to my top ebook program Major Mistakes That 99% of Women Make With Men here.

Talk to you soon!